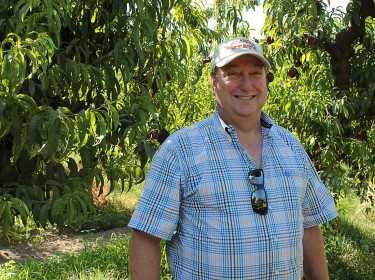 “It’s pretty humbling to think that science has made all these big improvements, but when we go back to what the basics are—what our parents had to deal with because they didn’t have all those products—we end up being just as successful in the end at controlling diseases and worms.”

The family connection to farming is definitive for Dean Kautz and his wife Nomie. Standing as a monument at the entrance to his second-generation California stone fruit farm is the plow his father used behind a team of horses when he first started farming in Kingsburg after World War II. It’s a statement Dean’s proud to make, and his two adult daughters, Rheya and Shelbi, are the third generation to grow up on the family farm.

“Farming connects you to roots. That’s where my family came from—the roots of the tree and the roots of the family, it’s all the same,” Dean said, standing in his plum orchard. That connection goes both ways: the farm carries on the legacy of the previous generation in tree fruit, and the inspiration from Dean’s daughter’s agricultural aspirations with the flock of purebred Southdown sheep that have become a pet project and side business for the Kautzs.

Dean started working in the orchards at age nine, and has been at it ever since. Today, in addition to farming, Dean works as crop insurance adjuster, and was formerly a pest control advisor, swimming in a world of chemically based solutions for a farmer’s problems. With all his experience in the field and exposure to the worst that can happen, he considered himself to be an unlikely convert to organic farming. Nonetheless, in 2001, he took the plunge and the results surprised him.

“We just jumped off the cliff and tried it and at first it was an economic move, but I’ve learned a lot along the way,” Dean said about the switch to organic. He was surprised to see that biologically based solutions, like compost tea, were effective natural fungicides, and that in a matter of time, bees and native wildlife came back into the orchards.

Organic production cast a new light on a world that was so familiar for Dean.

“We learned to depend upon the natural ecosystem, which it’s hard for me to even say that that works, but you know what? It does. Mother Nature tends to take care of herself,” he said. “But, you also have hail. So I think she’s reminding me that she’s still in control,” he added with a smile, standing in an orchard recently affected by an unexpected hailstorm.

“It’s pretty humbling to think that science has made all these big improvements, but when we go back to what the basics are—what our parents had to deal with because they didn’t have all those products—we end up being just as successful in the end at controlling diseases and worms,” Dean commented, also acknowledging the roll of scientific discovery in organics as well the contribution from the earlier organic farmers who paid the price of disaster and failure to find the solutions that work.

Through the transition, many things have changed on the farm, but, Dean continues to hang his hat on his father’s advice: “There’s no substitute for your shadow in the orchard.” And he continues to appreciate that the roots that began a generation ago at home, have a reach far beyond the farm where they’re planted. “With farming, it feels like we’re doing something to contribute to a solution for the world’s food problems, and it gives us an opportunity to make a bigger impact than we are,” Dean said.