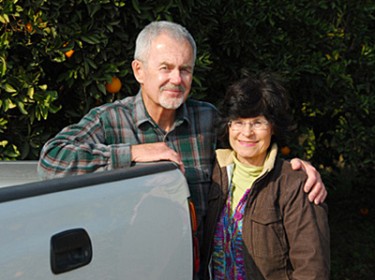 “The basic farming is still: water them, and prune them, and harvest them, try to keep them warm, and try to keep the bugs from getting them. How we do those things is a little different, but not a lot.”

Dave Sherwood’s Great-Uncle John put it all on the line to join the California gold rush in the late 1800s. He never made it to the gold mines, but he did pave the way for future generations of Sherwood family farmers to come to California when he stumbled upon a different kind of gold: citrus.

Dave is the fourth generation in his family to grow citrus in California, and has been farming at his Central Valley ranch since his father first bought the property in 1965 when he was 21 years old.

For many years he was the sole farmer, without any full-time help, which meant that many winter season holiday evenings were spent watching temperatures and bundling up to go out and turn on the wind machines that protect the fruit from freezes. Now that Dave is semi-retired, he has more time to leave the farm and get out to the mountains with his wife to hike, bike and ski.

Dave transitioned his first orange grove to organic production in 2001 and has certified several others since then. The experience with organic growing he says, has been “pleasingly worthwhile.”

“It’s been a real learning curve that’s for sure,” Dave said about the move to organic production, “The first few years are the most difficult—for all your life you have been used to thinking of a well-farmed grove as a grove without weeds and then you have to get used to letting a cover crop grow. That part is difficult, but it has been very rewarding and it really has gotten into somewhat of a balance.”

Dave has seen a lot of changes in the industry and politics of farming since he started in the 60s, but says the work that happens in the field stays the same.

“The basic farming is still: water them, and prune them, and harvest them, try to keep them warm, and try to keep the bugs from getting them. How we do those things is a little different, but not a lot,” he said.

His decades of experience have given Dave time to form plenty of opinions of the best way to do things in his groves, but he also says he’s open to hearing new ideas. That, and paying attention to the big picture—what consumers want and the new industry research—helps keep the farm moving forward year after year.