Menu
Menu
Rob and Sarah Jackson
“I farm organically primarily because I desire to do for others what I would have them do for me.” 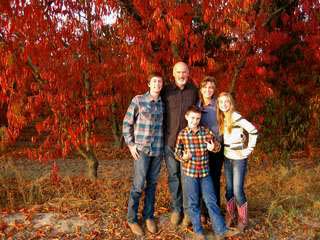 Growing up in a multi-generation farm family makes accessing the wisdom of the past as much a part of the present as the sun rising every morning. And as Rob Jackson farms the same land his father farmed a generation before, the adages and reminders of old wisdom remain as applicable in the times of iPhones and organic technologies as they did when the first Swedish farmers settled in the Central Valley.

Rob notes a few old favorites: “Make hay while the sun shines,” “The best farmer is outstanding in his field” and “You’re not a farmer unless you have a pocket knife.”

That last one came from Rob’s Grandpa Jackson. With a knowing shake of his head, Rob confirmed his grandpa’s words, “I can tell you, there have been days when I don’t have a pocket knife with me and I can’t get certain things done.”

Rob’s ranch has been bearing fruit for a long time. The earliest history he knows about his property along the Kings River comes from the childhood memories of Arnold Cederval, a man raised a fourth of a mile away from the ranch in the early 1900s. Arnold recounted to Rob in the 1990s that it was his job to oil the pump used to irrigate the crop of cling peaches planted on the property in about 1910, just 30 years after the railway switch was established in the town that is now Kingsburg.

That crop of peaches is long gone of course, but water from the same river is now nourishing Rob’s organic apple, plum and Asian pear orchards on the river property where the Jackson family resides. Just down the road a ways are Rob’s organic cherries, peaches and nectarines.

Rob’s personal history on the ranch started in 1972 when his father bought the land and started farming cauliflower, onions, cotton, string beans and eventually grapes and fruit trees. So even as a kid, Rob was never far from the fields, working hard and learning the family profession firsthand.

Rob and Sarah Jackson’s five children Noah, Josh, Grace, Gabrielle and Hannah are growing up on the same land their father helped work when he was young. The apple doesn’t fall far from the tree. Rob’s oldest son Noah, 15, is walking literally in his father’s teenage footsteps when he carries out his job of checking the water and keeping up with irrigation for the fruit trees.

Another of the old adages you’d find at work on Rob’s farm is the golden rule. Rob started pursing organic methods of cultivating his trees in the late 1980s when he realized he wouldn’t want to be the person driving a tractor, breathing in pesticides and chemical residue, and therefore couldn’t rightly ask his crew members to do it either.

“I farm organically primarily because I desire to do for others what I would have them do for me,” Rob said.

And then, in a way reminiscent of that steady old wisdom from days gone by, he added, “You take pride in the product you create, whether it be the health of the tree, or the health of the fruit you bring to market. That, ultimately, is the sign of how you’re doing.”

The Jackson’s organic Hosui Asian pears are a fantastic addition to our fall fruit collection.